Neurophysiology Plus Iceland is represented at TMS-workshop in Denmark 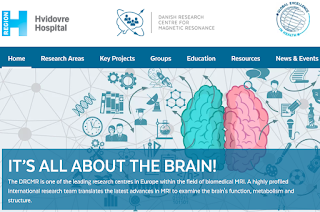 From November 22nd to November 24th 2017, Danish Research Center for Magnetic Resonance (DRCMR) will host a new TMS workshop with special focus on multimodal combinations of TMS with other neuroimaging techniques (EEG-TMS, fMRI-TMS).
DRCMR is located in Hvidovre Hospital, a university hospital located at 9 km from Copenhagen which is administered by the Capital Region of Denmark.
Neurophysiology Plus will be represented at this meeting but also during the 20th to 22nd period for a better understanding of the center facilities, protocols used and technical equipment.
We look mostly to have a valuable and critical analysis input from the team leaded by Prof Dr Hartwig Roman Siebner on the Icelandic proposed study.
In this proposed clinical applied research project members of Neurophysiology Unit and Neurosurgery department from Reykjavik University and National University Hospital of Iceland are trying to analyze if TMS-EEG modality can be used or not to assess functional cortical tissue and brain effective connectivity in patients with brain tumors.
In Iceland, another simple technique, TMS motor evoked potentials (TMS-EMG) started to be used for preoperative mapping in 2016. We set and marked the position for the intraoperative direct stimulation (IONM) as in the nineties when this technique was described.
On the beginning of November 2017 neurosurgery department was interested on this procedure of preoperative mapping with neuronavigation. Again we used the available devices and we were able to map motor hotspots of the upper limb and speech area in a healthy subject. On 28th of November the team will investigate and perform motor and speech mapping in two patients with brain tumors located in eloquent areas of the brain. It will be for the first time that neuronavigated mapping is applied and used for the Icelandic brain tumor patients.

And the question remains: Is there a reason to believe that TEPs (TMS-EEG evoked potentials) can be used to assess better the "non-eloquent" brain cortical tissue and give a better map of the non-affected brain areas in order to avoid new post-intervention neurological deficit in patients with brain tumors ?
at November 20, 2017 No comments:

by Neurophysiology Plus Iceland
2nd of November 2017

After 11 months since the first awake craniotomy was performed in Iceland, medical and technical staff from Neurosurgery Department and Clinical Neurophysiology Unit of the Icelandic National  University Hospital #Landspitali started new testing protocol for the patients with lesions located in eloquent areas of the brain.
The neuronavigated transcranial magnetic stimulation (neuronavigated-TMS) was initiated with a pilot study of a healthy subject on 1st of November 2017 to find motor "hot-spots" and "speech area" (by inducing the speech arrest) in total relaxation and safety.
When the team will perform the test in patients, the functional areas will be saved with Talairach space, a 3-dimensional coordinate system of the brain structures, into the same neuronavigation system used by neurosurgeons in the operating room with the aim to avoid their damage during the surgical procedures.
On 13th of July 2017 the team tried this set-up on a phantom head in the operating room theater (here).
Many thanks to Dr Ingvar Hákon Ólafsson (Neurosurgery Department) for his interest and collaboration, to Aron Dalin Jónasson (TMS Clinical Neurophysiology Unit technician) to support the MRI procedure and the pilot noninvasive TMS neuronavigation, Ágúst H. Guðmundsson (Intermedica & Medtronic) and to all Neurophysiology Unit medical and technical staff. 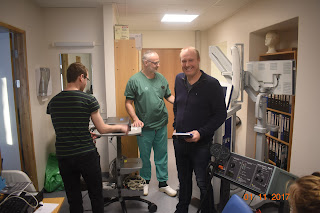 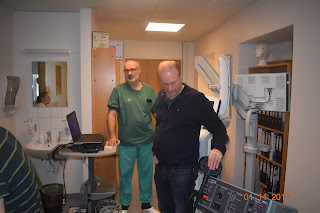 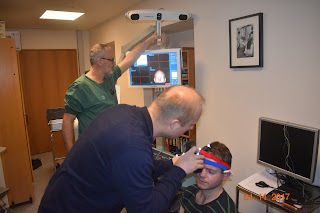 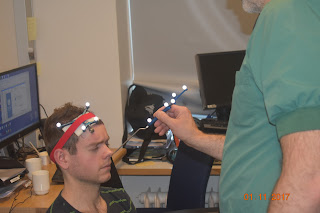 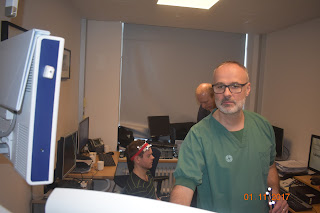 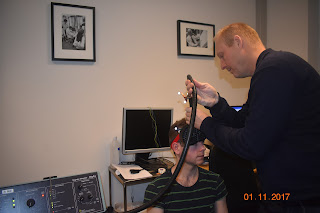 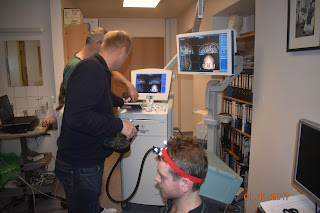 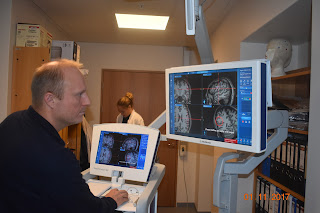 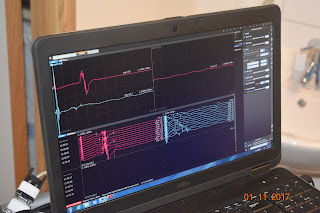 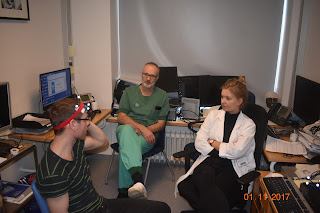 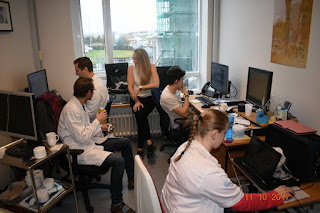 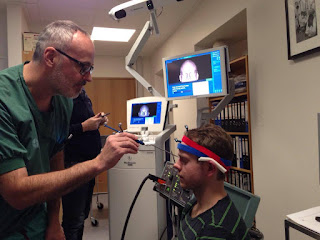 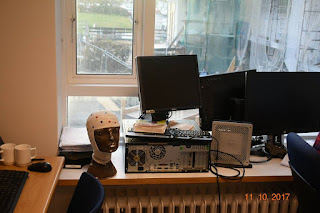 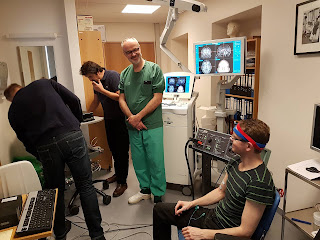 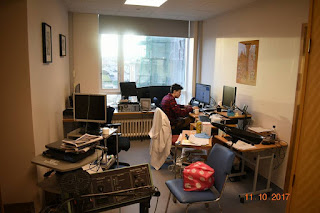