by Neurophysiology Plus Iceland © 2018

We performed the following modalities:
Transcranial MEP, Corticogeniculate MEP (CoMEP), SSEP from both tibialis nerve, EEG, mapping cranial nerves (accesorius, hypoglossus, glosopharingeal, facialis ), BAEP, TOF, Blink Reflex.
Results: All modalities could be performed with exception of blink reflex which was not elicited.
Incidents: At the end of the surgery we observed decrement of right facialis (Orbicular oris muscle), CoMEP decrement of more than 80% which did not recover throughout the rest of the surgery. Surgeons explained that "there was a bleeding around the nerve". They started cooling,  irrigate and "treat" the lesion.  Mapping showed also partial decrement, but recovered after 20 minutes when stimulation was performed proximally.
Our protocol for corticobulbar MEP was double train: 1st train formed by 5 stimuli with 50 ms duration (ISI 2ms), 2nd train (single pulse 50 ms)  ITI (inter-train interval) 40 ms.
LIMIT: The assessment was possible for the right Orbicularis oris muscle and slightly for the right Orbicularis oculi muscle. No responses were obtained from the left muscles (we didn´t increase the stimulus intensity to look for the better Threshold-level ) and we consider the absence of other muscle MEP ipsilaterally (e.g. mentalis) as a serious limit of interpretation. 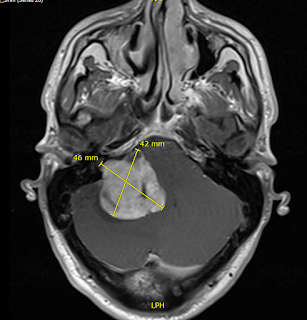 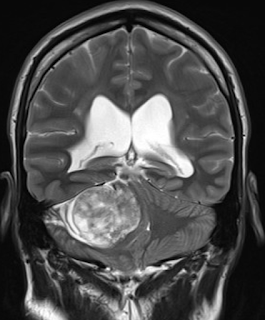 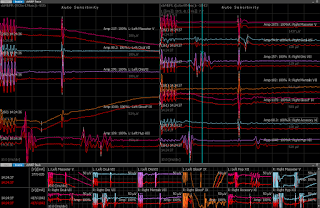 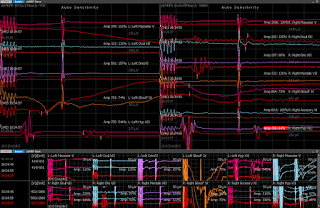 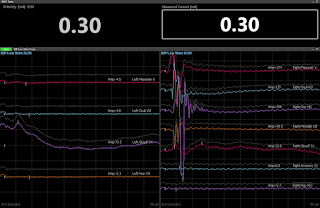 Mapping with 0,86 mA (after the decrement was seen in CoMEP) 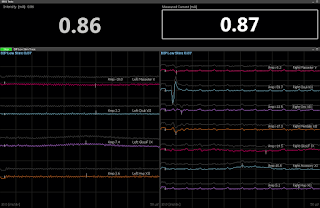 Conclusions:
Ø  All modalities with exception of  CoMEP showed similar findings at the end as at the beginning of the surgery. R1 (Trigeminofacial reflex) was not possible to elicit during this surgery.
Ø  Mapping was useful to drive the surgery moments before debulking and after the surgical removal of the tumor.  We expect partial facial nerve dysfunction (temporary deficit) in the right side.
Ø  24h after surgery, the patient showed 60% function of facial nerve preserved, Grade III (of VI) on House-Brackmann. Other VIII, IX and XII monitored cranial nerves didn´t show deficit 24 h after the surgery.
Ø  CoMEP as a measure of corticogeniculate motor tracts with different and variable assessment protocols should be considered as mandatory when trigeminofacial reflex (R1) cannot be monitored and the interpretation of the amplitude loss should be verified with anesthesist, neurosurgeons and with T-L technique (Calancie B, 2017).