Two days ago a BBC news announce that the computer generated word "Laurel" produced an internet debate if this is heard as "laurel" or "yanny". 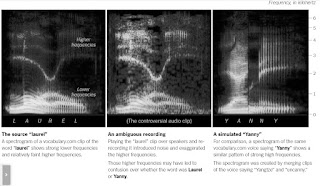 The sound specialists run to explain how the humans are losing the higher frequencies listening ability with the age and this why we might listen the world with lower frequencies as is would be "laurel".
I was listening the playback and for two days since the Head of Neurology Department and one colleague told me the story and the new internet debate news, I always had listen the "yanny" word.
30 minutes ago I started to listen "laurel" word.
Yes, I know the word was created by computer and is an artificial voice the human cannot reproduce. The sounds are fake and the frequency differences are very difficult to assess by a computer voice generator. I remember the applications when you press a word text and suddenly you could listen it. This happened more than 6-7 years ago. There was no tonality, no stops or pause between words, no comma. You had to do everything.
But what happened to me? Why did I hear "laurel".
I did something before changes occurred. And I said to me, yes.
The gabaergic neurons from my cortex are weaker (the inhibitory mechanisms of my cortex were diminished by the substance intake)  and the sub-cortical areas and temporal lobe auditory cortex or let us say the auditory biological neural network is now a little bit more "awake"  and can hear the lower frequency. Or the higher frequencies are perceived with more glutamatergic (excitatory neurons) mechanisms? Is this known?
Ono et al 2017 found that responses to pure tones of both inhibitory and excitatory classes of neurons were similar in their thresholds, response latencies, rate-level functions, and frequency tuning, but GABAergic neurons may have higher spontaneous firing rates. 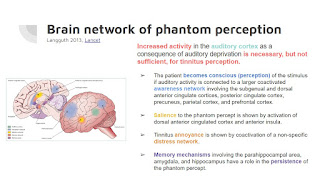 Conclusion:
The debate is easy: We are in front of unknown auditory perception mechanisms of a fake *artificial* sound. It seems that all is in our brain and that the gabaergic inhibitory mechanisms are involved. As much as you approach the freedom of the deeper brain structures (by forming gaps in the cortex "analytical" system) you will listen differently the word.